To share your memory on the wall of James Morrison, sign in using one of the following options:

Boogie, as he was affectionately called, was a graduate of West Iredell High School in Statesville, NC and Johnson C. Smith University in Charlotte, NC. He was a member of the illustrious Phi Beta Sigma Fraternity.

At an early age, he joined Clark’s Chapel Baptist Church in Statesville, NC, where he served as a choir member and later the Director of Music. He later moved his membership to New Life Missionary Baptist Church in Troutman, NC. He was a gifted musician and had a love for music, serving as the Director of Music for Cameron Presbyterian Church in Elmwood, NC and New Life Missionary Baptist Church in Troutman. At the time of his death, he was employed by Pepsi Cola Corporation as a Telephone Sales Operator and Route Relief Specialist. A loving brother, uncle, cousin and friend, he will truly be missed.

Mr. Morrison will remain at Rutledge and Bigham Funeral Home until taken to the church to lie in state at 10:30 a.m. Members of the family will receive friends at the church from 11:00 a.m. until 11:30 a.m., but will assemble at the residence of his sister, Gloria M. Long, 628 North Race Street, Statesville, NC., at other times.

Visit the Book of Memories for Mr. Morrison at www.rutledgeandbigham.com. Rutledge and Bigham Funeral Home is serving the family of Mr. James “Boogie” Morrison.

To send flowers to the family or plant a tree in memory of James Everette "Boogie" Morrison Jr., please visit our Heartfelt Sympathies Store.

Rivia Brown, Brenda Manley and Family, and other have sent flowers to the family of James Everette "Boogie" Morrison Jr.
Show you care by sending flowers

Please accept our deepest condolences and know that God loves you and with time he will give you peace and strength. We will continue to keep all of you in our prayers today, tomorrow, and the days ahead. We love you!

Posted May 14, 2021 at 11:40am
Dear Morrison Family, Please accept my deepest sympathy in the loss of your precious James. I am thankful that God gave me the blessing of working with him for nearly thirty years at Pepsi-Cola. He was a dear friend in the Lord and when I would ask him how he was doing, he would often reply " I am blessed and highly favored!" Yes, James, you are indeed a child of The King and I will miss your smile until we meet again. Cheryl Hodges- Granite Falls
Comment Share
Share via:
J(

Posted May 14, 2021 at 08:40am
Our deepest condolences to the Morrison & Long Families! James will truly be missed. His smile, the warmth of his greetings - we will remember. We are thankful for having known him and all the Christian Brotherly Love he showed to everyone. Thank God for him. May God’s Grace comfort the family in the days ahead. Our prayers are continually with you. The Drakes (Pat, John)
Comment Share
Share via:
RB

Brenda Manley and Family purchased flowers and planted a memorial tree for the family of James Morrison. Send Flowers 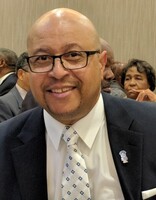