To share your memory on the wall of Naomi Huitt, sign in using one of the following options:

She was an educator for 38 years at Rosenwald, Sherrills Ford, Maiden, Rohoney and Claremont Elementary Schools.

She was a member of Martha’s Chapter #25., The National Council of Negro Women, NAACP, Claremont Library Club and numerous other organizations.

Naomi married her beloved Ralph Lee White who passed away in 1985. She later married George Huitt who also predeceased her.

In addition to her family, Naomi was deeply committed to her church, Smyre’s Chapel A.M.E. Zion in Catawaba, NC, where she served on many boards and committees.

Naomi is survived by her son Michael of Claremont, one sister, Clara Tyson Carson also of Claremont, and a host of other nieces, nephews, and relatives.

The family has entrusted arrangements to Rutledge and Bigham Mortuary of Statesville.

A memorial will be planned for a later date to celebrate her life and accomplishments.

In lieu of flowers, donations may be made to the building fund at Smyres Chapel A.M.E. Zion Church, 100 6th Ave SE, Catawba, NC 28609.
Read Less

To send flowers to the family or plant a tree in memory of Naomi Huitt (White), please visit our Heartfelt Sympathies Store.

Receive notifications about information and event scheduling for Naomi

We encourage you to share your most beloved memories of Naomi here, so that the family and other loved ones can always see it. You can upload cherished photographs, or share your favorite stories, and can even comment on those shared by others. 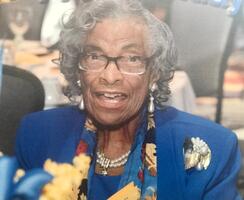