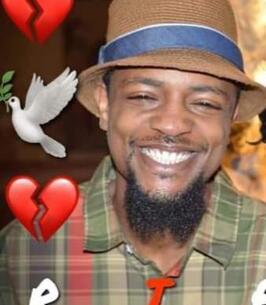 John 14:1-3 "Let not your heart be troubled: ye believe in God, believe also in me. In my Father's house are many mansions: if it were not so, I would have told you. I go to prepare a place for you. And if I go and prepare a place for you, I will come again and receive you unto myself; that where I am, there ye may be also.

Mr. Rasan Jamar Portlock, 38, was born on August 6, 1983, and was the son of Reginald Jerome Portlock, and Glenda Morrison Reid. He passed away on June 11, 2022, at Charlotte Atrium Hospital.

He was preceded in death by his brother, Dewayne Doster; grandparents, Horace and Helen Morrison, and Thom as and Roberta Lowery Portlock.

It seems so unreal that you are gone
When just the other day
You walked and talked and laughed with us
Then suddenly slipped away
Your peaceful smile, your joyful laugh
How sweet the memory still
Your parting left an aching void
Only God’s love will fill.
The Family


A Celebration of Life will be held on Friday, June 24, 2022, at Christian Outreach of the Piedmont, Statesville, at 3:00 pm., with Reverend Usry officiating. Visitation will be from 2:30 - 3:00 pm, and burial will follow in the Belmont Cemetery, Statesville.

Visit the book of memories for Rasan Jamar Portlock at www.rutledgeand bigham.com. Rutledge and Bigham is serving the Portlock family.