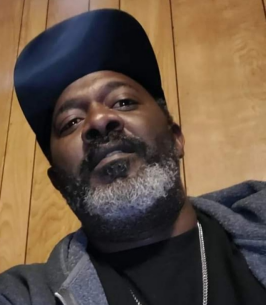 John 14:1-3 "Do not let your hearts be troubled. Ye believe in God; believe also in me. My Father's house has many mansions; if that were not so, would I have told you that I am going there to prepare a place for you? And if I go and prepare a place you, I will come back and take you to be with me that you also may be where I am."

Richard Steven Sinclair, Jr. 45, affectionately called "True" of The Bronx, New York, passed away on Saturday, May 14, 2022. Born on March 2, 1977, he was the son of Ruth Ann Burrison and the late Richard Steven Sinclair. He was married to Kerriann Natalie Sinclair, who survives. In addition to his father, he was also preceded in death by his Stepfather Cleve Warren, his mother-in-law, Merilyn Medley, his sister Patrice “Trin” Sinclair, and his Uncle Bobby Dobson

He was a graduate of Theodore Roosevelt High School in The Bronx, New York and attended Johnson C. Smith University in Charlotte, North Carolina. He was self-employed as a Disc Jockey and was known as DJ StrongBoy. He was also an entrepreneur and graphic designer. A father, husband, brother, cousin, uncle, protector, number one son – Rich will be remembered as a beautiful soul who impacted and improved all that he touched. He was a kind spirit who gave those he cared about his very last.

Celebration of Life Services will be conducted Wednesday, May 25, 2022, at 11:00 a.m. at Rutledge and Bigham Funeral Home, 603 South Center Street, Statesville, N. C. with burial to follow in the Belmont Cemetery. Mr. Sinclair will remain at Rutledge and Bigham Funeral Home where members of the family will receive friends from 10:30 a.m. until 11:00 a.m. (thirty minutes prior to the service), however, they will be at the residence at other times.

Visit the Book of Memories for Mr. Sinclair at www.rutledgeandbigham.com. Rutledge and Bigham Funeral Home is serving the Sinclair Family.