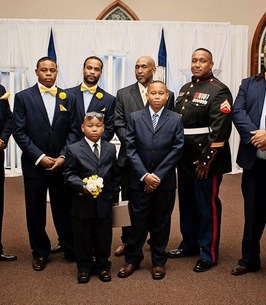 John 16:22 " And ye now therefore have sorrow: but I will see you again, and your heart shall rejoice, and your joy no man taketh from you.

Mr. Roshaude Antwann Campbell, 32, of 340 Gray Street, passed away at his home on Sunday, March 20, 2022. He was born in Statesville on April 14, 1989, and was the son of Dwight Franklin Martin and Teresa Denise Campbell. He was married to Shonea Hughes Campbell, who survives. He was preceded in death by brother, Curtis Campbell; his uncle, Durk Deon Campbell, his aunt, Regina Campbell and his grandfather, Henry Campbell.

He attended Statesville High School and his hobbies included riding ATV’s and Dirt Bikes; fixing cars, and he was an avid collector of fire arms and guns. He had a deep love for his family.

Celebration of Life Services will be conducted Saturday, March 26, 2022, at 1:00 p.m. at Rutledge and Bigham Funeral Home. Apostle Sylvester Gillespie will officiate and Minister Angela Minor will eulogize. Burial will follow in the Belmont Cemetery.

Mr. Campbell will remain at Rutledge and Bigham Funeral Home where members of the family will receive friends from 12:00 p.m. until 1:00 p.m., but will assemble at the residence of his grandmother, Mrs. Virginia Campbell, 422 Chambers Street, Statesville, N. C., at other times.

Visit the Book of Memories for Mr. Campbell at www.rutledgeandbigham.com. Rutledge and Bigham Funeral Home is serving the Campbell Family.