To share your memory on the wall of Theresa Krider, sign in using one of the following options:

She was a 1986 graduate of North Iredell High School and was employed as a Certified Nurse's Assistant. She was a former member of Knox Grove Baptist Church an later joined New Creation Baptist Church where she sang on the choir until her health failed. Theresa joined Modern Free and Accepted Masons of the World, Inc., on Auust 28, 1994, and became a lifetime member on June of 2015. She was a member of the Sunshine Chapter #921, where she was Secretary and was a faithful member. She loved softball and was so good at it.

GO TO VIEW ONLINE STREAMING OF THE SERVICE...GO TO FACEBOOK TO Bernardeane Moton or Michael McClelland Page.
AFTER THE SERVICE IS OVER YOU CAN VIEW THE ONLINE VIDEO BY CLICKING ON HER PICTURE ON OUR WEBSITE. GO TO The BOOK OF MEMORIES CLICK ON PHOTOS AND VIDEO. YOU WILL SEE A LINK TO FACEBOOK - THAT'S THE ONLINE VIDEO.

Visit the Book of Memories for Ms. Krider at www.rutledgeandbigham.com. Rutledge and Bigham Funeral Home is serving the Krider Family.
Read Less

To send flowers to the family or plant a tree in memory of Theresa Annette "Sweethang" Krider, please visit our Heartfelt Sympathies Store.

Receive notifications about information and event scheduling for Theresa

We encourage you to share your most beloved memories of Theresa here, so that the family and other loved ones can always see it. You can upload cherished photographs, or share your favorite stories, and can even comment on those shared by others.

Posted Mar 02, 2021 at 03:17am
Condolences to the family. Sis. Krider will be missed by all you came to know her sweet aura and her radiant smile. Until we meet again Dear One.

Posted Feb 28, 2021 at 02:57pm
My prayer is that the family will be comforted in knowing that she has touched so many people with her beautiful spirit. I always loved seeing her during our travels with Modern Free. She always greeted you with a smile and love. Theresa will be missed but her legacy will live on.

Posted Feb 28, 2021 at 09:25am
Our deepest condolences and prayers to family and friends. You our Sister touched many lives as you will forever be apart of our hearts memories.
Ebony Queens Chapter #981
Order of the Eastern Star
Comment Share
Share via:
TD

Posted Feb 26, 2021 at 04:25pm
My deepest sympathy to the family in the loss of your loved one, Theresa Krider. I met Theresa about a year ago. I was Theresa’s Avon representative. I guess the last time I saw her was in December when we met for her to get her order. I enjoyed getting to know Theresa. I know she loved her family. In the short time I knew her, I learned she loved tie dye clothing, makeup and sterling silver jewelry. Rest In Peace sweet lady. You will be missed. Your family is in my prayers. Teresa Duke
Comment Share
Share via: 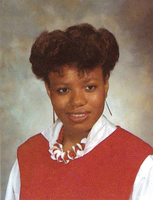