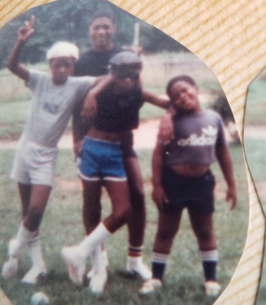 Psalm 34:18 " The Lord is near to the brokenhearted and saves the crushed in spirit"

The Family Tribute
Torrey Kesean Miller, Sr. affectionately called, T-Styles, was a professional barber and life-long resident of Statesville, NC and passed away unexpectedly on Thursday, February 10, 2022, at the age of 44. Torrey was born in Iredell County (Statesville) on September 28, 1977, and was the son of Frankie and Louisa Kimbrough Miller. He was married to Tonika Westmoreland-Miller on September 7, 2015.

He graduated from Statesville High School in 1996 and continued his education at a Best University in Greensboro, NC. Upon licensure, he utilized his artistic craft until his death and served the community as a passionate barber/mentor. He realized a lifelong dream of owning his own business T-Styles. Torrey was a devoted father, an exceptional football player, and Steelers fan. He enjoyed music, cooking, grilling, traveling, and being social. He was a spiritual man and touched the hearts of many people with great conversations and laughs. He will be deeply missed by his family, friends, and all who knew him.

In addition to his wife, Tonika Miller of the home and his parents, Frankie and Louisa Kimbrough Miller, he leaves to cherish the memory of his life, his children, Unique Williams, Torrey Miller, Jr. and Jazmine Scott ; his sisters, Chante’ Miller (Maria), Keisha Smith, Shamika Stevenson; his brothers, Ronald Smith, Jr. and Travis Barnes, his granddaughter, Skylar Williams; his godmother Helen Gibbs (Jerry), and a host of loving aunts, uncles, cousins, and friends.

Celebration of Life Services will be conducted Friday, February 18, 2022, at 1:30 p.m. the Christian Outreach of the Piedmont. Minister Maurice Lackey will officiate and burial will follow in the Belmont Cemetery.

Mr. Miller will remain at Rutledge and Bigham Funeral Home until taken to the church to lie in state at 12:30 p.m. Members of the family will receive friends at the church from 1:00 p.m. until 1:30 p.m., but will assemble at the residence of his parents, prior to the service.

Visit the Book of Memories for Mr. Miller at www.rutledgeandbigham.com. Flowers, donations, and condolences may be offered through Rutledge & Bigham.