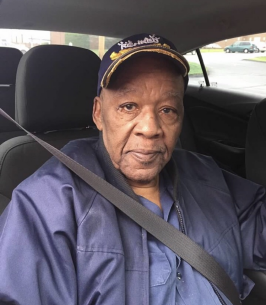 John 3:16 "For God so loved the world, that he gave his only begotten Son, that whosoever believeth in Him should not perish, but have everlasting life."
A smile for all, a heart of gold, one of the finest this world could hold
Never selfish, always kind, these are the memories he leaves behind…

He was employed by Southern Screw for many years and served with the United States Navy during World War II. He was a member of St. John Baptist Church.

Day is done, gone the sun, From the lake, from the hills
From the sky; All is well, Safely rest, God is nigh.

Celebration of Life Services will be conducted Monday, February 28, 2022, at 2:00 p.m. at Christian Outreach of the Piedmont. Pastor Glenn Usry will officiate and burial will follow in the Belmont Cemetery with Military Rites.

Mr. Keaton will remain at Rutledge and Bigham Funeral Home until taken to the church to lie in state at 1:00 p.m. Members of the family will receive friends at the church from 1:00 p.m. until 2:00 p.m., but will assemble a tthe residence at other times.

Visit the Book of Memories for Mr. Keaton at www.rutledgeandbigham.com. Rutledge and Bigham Funeral Home is serving the Keaton Family.