To share your memory on the wall of Jerry Graham, sign in using one of the following options:

He attended the Statesville High School and was employed by Statesville Plywood prior to his retirement. He was united in marriage to Sandra Alexander Graham, who survives. In addition to his parents, he was preceded in death by siblings, James Charles Graham, JoAnn Graham, Clarence Graham, Orene Saddler, Fred Graham, Diane Graham and Nola Peck and three nephews, Tryone Peck, Phil Saddler, and William Henry Steele; and his aunt, Annie Ruth Stanley.

Celebration of Life Services will be conducted Wednesday, February 3, 2021, at 11:00 am at Rutledge and Bigham Funeral Home, 603 South Center Street, Statesville, NC 28677. Rev. Kevin Cowan will officiate and burial will follow in the Belmont Cemetery.

Visit the Book of Memories for Mr. Graham at www.rutledgeandbigham.com. Rutledge and Bigham Funeral Home is serving the Graham Family.
Read Less

To send flowers to the family or plant a tree in memory of Jerry Wayne Graham, please visit our Heartfelt Sympathies Store.

Receive notifications about information and event scheduling for Jerry

We encourage you to share your most beloved memories of Jerry here, so that the family and other loved ones can always see it. You can upload cherished photographs, or share your favorite stories, and can even comment on those shared by others. 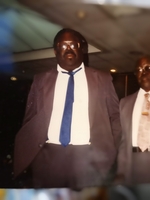